I don’t want to think about the families in Mexico that are cold tonight. In this moment I want to be back in GA where I’ve been for a week and where I’m completely removed from the suffering.  Where I don’t carry the burdens of those across the border as much because I’m so far removed from it, I don’t know what’s happening constantly.  Honestly, I don’t want to know that the winds are howling out of control tonight.  I don’t want to come to my own house and know that the wind picked up a table, 3 chairs, and a rug off my porch and threw them to the ground.  I don’t want to think about families in cardboard houses trying to hide from the wind or trying to stay warm tonight without any source of heat.
I’m back on the border and it’s hard.  There is something to be said about seeing the needs of others daily to truly make you take on and carry their burdens.  I think you have to walk amongst the suffering.  I think for it to infiltrate your heart and soul it has to affect you too.  I think you have to wake up in the morning and see it until you go to sleep at night.  It has to become your life rather than just a part of it.  Even being on the border and hearing the wind howling outside doesn’t affect me to the extent that it would if I was sitting in a cardboard house rather than a heated apartment right now.  If I was hiding from the wind myself tonight I’d fight harder tomorrow.  I’d write more blogs, I’d try harder to rally people to help build houses or give donations for electric blankets. I'd pour all of my efforts into finding a way to make a difference rather than the tasks that I’ll inevitably do instead.  However because the wind is howling outside my apartment tonight, everything I "needed" to do is getting pushed to the side because i can't shake this burden as i try to live my life.
I’m grateful for this perspective back on the border tonight.  I’m grateful for this painful perspective because honestly I’d rather not look.  I’d rather not take on the burdens of those that are suffering.  I’d rather isolate myself by working, playing and living with people that aren’t in need, that aren’t freezing to death or starving.  But I don’t think that’s the point of this crazy world we’re living in.  And it definitely wasn’t the point of Jesus.  He became one of those suffering in every aspect, got down on the same level, felt the sacrifice and the pain. Because only then could He really do something to change everything.
You have the ability to make a difference. To find out how you can build a home for a family in Mexico and relieve them from ever having to endure another winter without adequate shelter, visit Casas por Cristo.  For more information on our ongoing electric blanket campaign in Mexico visit The Gift of Warmth.
Thank you for being willing to carry the burdens of families in Mexico right along with us.
Posted by Casas por Cristo at 1:03 PM No comments: 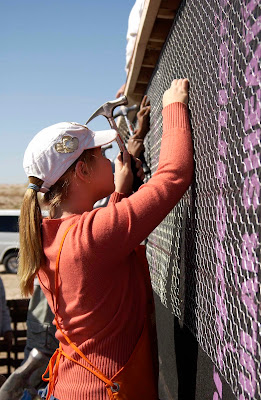 Have you been wanting to come on a trip to build a home but don't have enough people to form your own team? Have you heard about Team Casas? Team Casas is a trip where we join individuals or smaller groups together to create one team. We take care of food, transportation, and everything you need while you're in Mexico. All you have to do is get yourself to the border! We'll cover it from there! Now we're offering trips in both Juarez and Acuna, Mexico. Check out our website for the different dates that we're offering Team Casas this year. All we need to make it happen is you!  Follow the link below for more information.

Posted by Casas por Cristo at 9:07 AM No comments: